I was walking down Victoria St, Darlinghurst on the night of March 5th, 2006 when a tiny little puppy jumped out in front of me. Little did he (or I) know it was a meeting that would change both our lives. He was a puppy named Mutley, living with a homeless guy who was trying to get rid of him – and I was a gal looking for something to love! The guy and I started chatting and within half an hour I was taking a very sick little dog home to care for him for the rest of his life. I will never forget the squeals of delight from my staff when they came in the following morning to see newspaper on the floor and a water bowl. Needless to say we didn’t get ANY work done that day. We soon christened him "Fang" due to his razor sharp teeth, tiny stature and rough start in life – this little guy needed a BIG name!
As a proud Mum, that Friday’s newsletter had a picture of baby Fang attached which resulted in lots of gushing emails from Social Diary members. I kept sending photos for 4 weeks but then decided I was being ridiculously self-indulgent... so abruptly stopped doing it. To my surprise, over 100 emails immediately landed in my inbox, demanding to know why there was no picture of Fang that week? I suddenly realised how lovely it was to see a gorgeous pup on a Friday afternoon, and decided it should be about everyone else’s pets not just mine – thus “Fang’s Pet of the Week” was born. PRs & Media now send photos of their beloved pups, cats, birds, mice, fish, cows, horses... even guinea pigs. Fang loves his mascotting duties and has also appeared on The Today Show, The Daily Telegraph, The Sun-Herald, The Australian and Adore Magazine on various doggy modelling assignments. Or basically whenever someone says, "Quick – we need a dog for this shot, someone call Fang immediately!" WOOF!
Fang Facts
Breed - half Jack Russell, half human
Age - 11 yrs
Birthday - Australia Day, 2006
Fave Parks - Glenmore Rd, Rushcutters Bay, Beare Park
Fave Restaurant - Fish Shop @ Potts Point
Fave Holiday Destination - Grandma & Grandpa’s
Best friend - Nigel
Girlfriend - Millie
Mistress - Lola the Sausage Dog
Nemesis - K'fa Kitten
Quirk - he has 4 legs but walks on 3
Trick - sitting on his bottom like a human
Loves - Liver treats, being hand-fed, inserting his tongue up your nose
Hates - Being home alone, storms, thunder, rain, Great Danes, German Shepherds, the postman and all Mail Call Couriers.
xxx Tiff & Fang
Submit Pet Of The Week Pet Of The Week 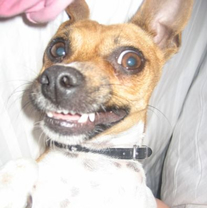